Fun with the Apostrophe

And it only took me 40 minutes paging through three reference books to find the rule so I could quote it to the person who raised the question, whom we will call Mr. Dunson (not his real name). 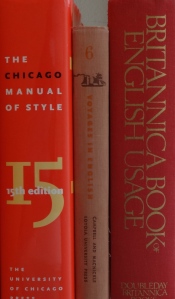 The books I consulted were Voyages in English 6, The Britannica Book of English Usage, and The Chicago Manual of Style, 15th Edition. I had to resort to books because one of the problems with being a writer is that, if you’re any good at all, you internalize the rules early on. With time, some of the details blur, such as the exact name of a tense (past perfect progressive, anyone?) or the geography of the parallel universe known as the Subjunctive Mood.

You know you’ve written something correctly, but when you have to explain why to a client or a colleague (or Mr. Dunson), it’s tricky to come up with the exact rule. Going online is easy but–and I’m sorry to disillusion you here–not everything you read online is 100% authoritative.

Besides, I paid good $$ for Chicago 15 so I use it every chance I get. (I have no idea where the BBoEU* came from; I’ve had it forever. Voyages in English 6 is a dated sixth-grade language grammar that I rescued from a wastebasket when I was helping a teacher clean out her classroom at the end of the year. It’s stamped “Complimentary Copy” so I suspect it was something she picked up at a convention. I keep it around because it’s a lot easier to navigate than either Chicago or BBoEU.)

In other words, Dan and Kate are having just one rehearsal dinner, which they both “possess” and so the apostrophe goes after the second name in the series. (The case could be made that Mr. Dunson and I possess the rehearsal dinner because 1) we’re paying for it and 2) it has yet to be bestowed. But I digress.)

I have so far been unable to find a reference to joint possession, by any name, anywhere in Voyages in English 6. They must have been saving it for the upper grades, along with subjunctive mood. Note to self: find copy of Voyages in English 8.

Like Loading...
This entry was posted in The Writing Life and tagged Chicago Manual of Style, grammar, writing. Bookmark the permalink.

8 Responses to Fun with the Apostrophe