On the Road Again

We have a pretty good federated library system where I live, but right now I’m frustrated because I’ve just discovered the Agatha Raisin series, a set of English cozies by M. C. Beaton, and more than half the lot aren’t available on CD.

On the bright side, the Agatha Raisins I was able to borrow got me through a long solo road trip this week when I drove to Ohio to spend a couple of days with my 90+ year-old father. Audiobooks, along with a country playlist on my iPod, made this week’s 850-mile round trip go a lot faster than it did when I first started driving back to my hometown and had to rely on the Bert Lance and Panama Canal hearings to while away the miles.

Other changes I reflected on during the most recent journey:

*After all these years, the interstates, toll roads, and expressways I need to take in Illinois are finally free of major construction zones. Coupled with benign smiles from the traffic gods, this meant that I sailed through Chicago with none of the usual backups, not even through the Loop.

*For several years it has been possible to pay tolls without rolling down the window, thanks to a little white plastic box affixed to the windshield. As a bonus, the I-Pass toll is half the cash toll, although this discounted toll is a multiple of what the tolls were when I started making this trip. See “major construction zones,” above.

I fear there will be a narrow window of opportunity to enjoy this; the roads that were being worked on when I moved to the Frozen North are probably due for another overhaul soon.

*Another toll-related improvement is Open Road Tolling, which means you don’t even have to stop to pay the toll, at least until you get to the Skyway and have to pause for a whole 10 seconds until the “I-Pass/I-Zoom Accepted” message lights up and the toll gate raises.

*The huge military vehicles I used to pass on transport trailers once were painted in green/brown/black camouflage. These days, they’re the color of sand. Opinion is divided about whether this change was really necessary.

*Some of the rest stops in Indiana have sculptures, including this wire-mesh deer “grazing” between the auto and truck areas. Yet another set of rest areas feature an inlaid marble map of Indiana on the side of the buildings in both the northbound and southbound lanes. There was a glare on the map when I was going down, and rain when I was coming back, so I don’t have a photo from either location. Differentiating rest stops and exits (I’m thinking the space theme in the concrete at the intersection of I-70 and I-75 in Dayton) goes a long way into making the expressway experience more pleasant. 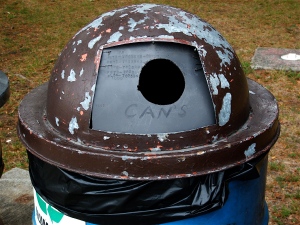 *All the rest stops along the way have recycling bins these days, and apparently they’re being heavily used.

True, the signs on some of them could be punctuated a bit better, but it’s the thought that counts.

Like Loading...
This entry was posted in Notes from the Neighborhood, The Examined Life and tagged Agatha Raisin, audiobooks, Chicago traffic, I-Pass, M. C. Beaton, open-road tolling. Bookmark the permalink.

10 Responses to On the Road Again