For a couple of days last week, I staggered around the house in a fog. Usually when I have a day like that, it’s May or August; a few kinds of pollen and I don’t get along. But it was the end of February, in Wisconsin, for crying out loud. Even the birch pollen is a good six weeks away.

And then it hit me. 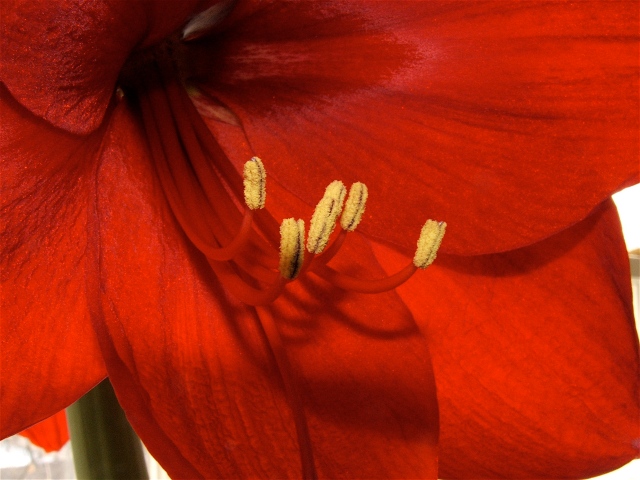 Our amaryllis is a dozen years old this winter. It has bloomed several times, putting forth two or three blooms on its stalk, but rarely in the winter, and for the past five or six years it has been just producing leaves. Although I’ve been following all the directions including the required winter rest, nothing has happened in the way of flowers.

Last summer I mixed a custom batch of growing medium (one part each of peat, vermiculite, and a blend of composts) for a container tomato, and decided to try it on the amaryllis as well. The bulb must have liked it, because by the end of August it had produced three enormous flowers. In fall I went through the usual routine of withholding water, removing the leaves as they yellowed and drooped, moving the pot to a dark corner of the basement after Thanksgiving, checking it every few days for new growth.

By early January I spotted a leaf tip, which turned out to be a bud that was so huge it took a full week to push itself out of the neck of the bulb. The stalk grew at least an inch a day, and then this happened. 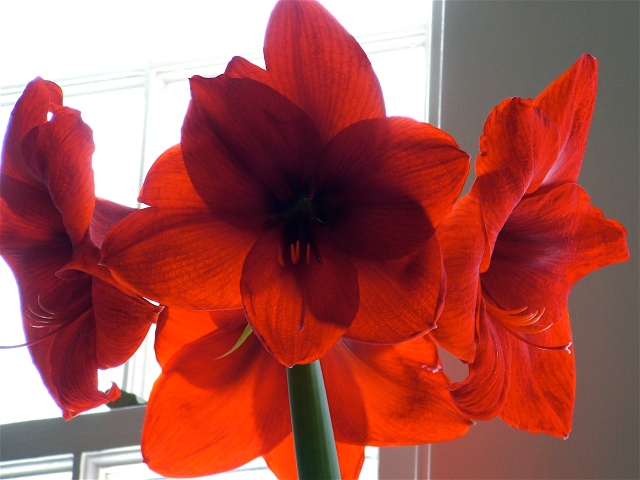 What else happened is that my eyes started itching and my nostrils felt as if I’d shoved boulders up them. Because pollen also makes me stupid, it took almost a full day to make the connection. Birch pollen and ragweed, I’m prepared for. Amaryllis pollen? Don’t think that even made the skin test.

Given the weather, I couldn’t exactly put the plant out on the front stoop, but I had a vague memory of reading something years ago about taming Easter lilies. I hunted up my embroidery scissors and snipped those pretty gold pollen-producing anthers right off into a Kleenex.

And now I’m done with antihistamines, and the drop-dead gorgeous amaryllis at the top of the stairs is going to be gorgeous for a few days longer than normal because the anthers are no longer trying to date the pistil.

They needn’t have bothered, anyway. The discerning eye will detect a presence of an offshoot between the bookcase and the flower stalk. I’ll probably separate the two this fall.

[And I know an amaryllis isn’t a lily. The pun was just too delicious to pass up.]

Extra credit for identifying the books most visible in the bookcase. Yes, two of the books are the same. Quadruple credit if you ID the second book from the bottom, which is there just because it fit.

Like Loading...
This entry was posted in Indoor Gardening, Notes from the Neighborhood, Seasonal and tagged amaryllis, antihistamines, flowers, houseplants, pollen, potting soil. Bookmark the permalink.

8 Responses to Gelding the Lily